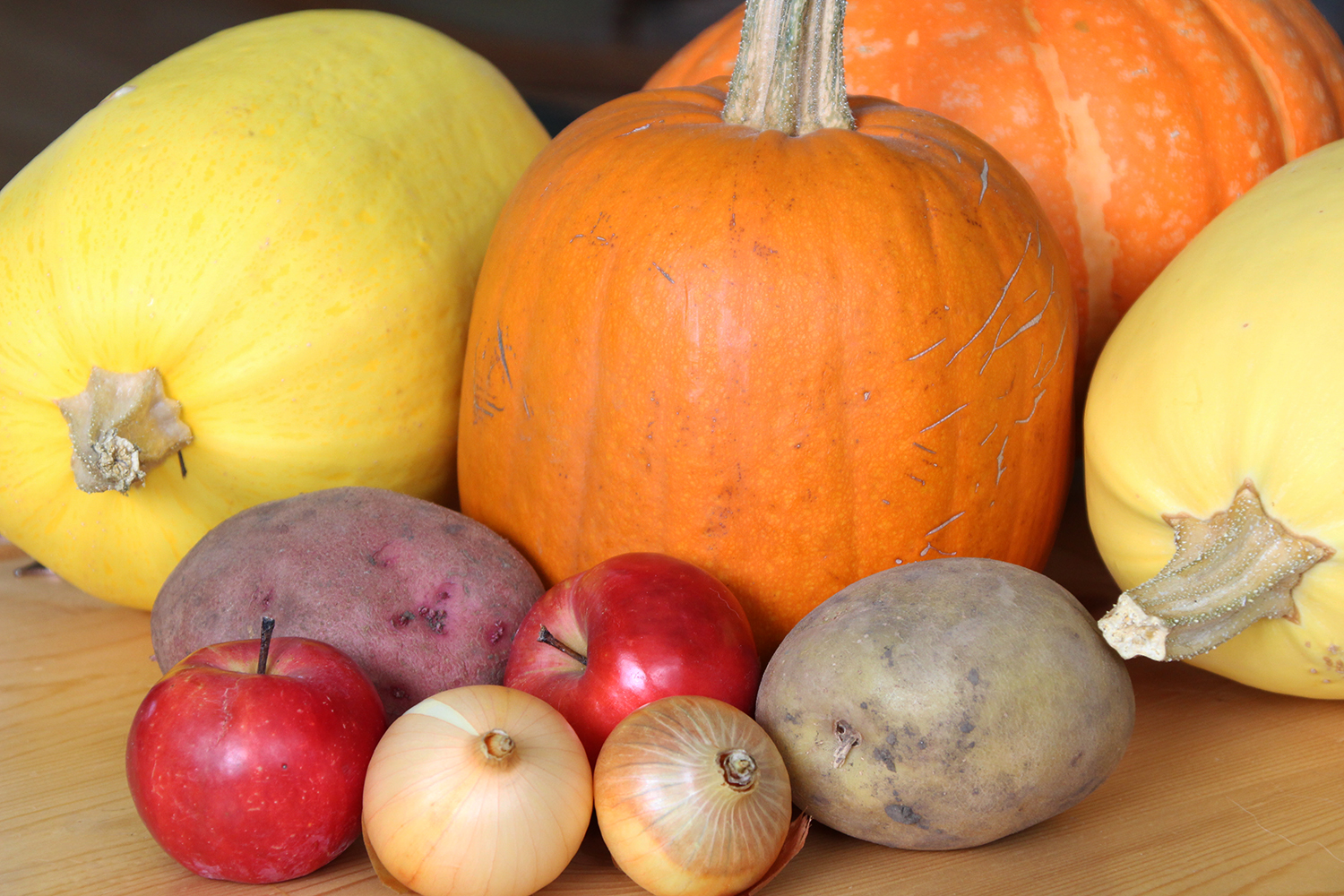 Here we are, the first week of April. Last month, I did a food storage / root cellar report for March; this is hopefully going to be a recurring feature. Here’s what we’ve still got in the root cellar (and other cold storage) in April:

Honeycrisp Apples: The apples were stored in ziploc bags; some in the root cellar, and some in the fridge. They were basically done last month, but we left the firm ones to check again this month. While they looked good on the outside, the insides were pretty brown. You could probably eat these in an emergency, but we chose to feed them to the chickens for a treat, instead.

Maxima Squash: We store our squash in a cool room, though with the sun really hitting the windows on the house now, the temperature in there is starting to fluctuate quite a bit. These squashes look to be some sort of Mandan cross, from our landrace breeding experiment. We still have nine good-sized (ten-ish pounds) orange winter squashes left, and they seem to be going strong, despite a number of our other squashes succumbing to sudden rot. They have a really waxy feel to them, which may have been what allowed them to store so well. We will save the seeds from these for replanting.

Sugar Pie Pumpkins: I am blown away by these. I have no idea why they are storing so long, but we still have three sound pie pumpkins (a couple have gone soft since March). Normally, the pie pumpkins don’t last much past Christmas. At this rate, we’ll have pumpkin pie for Easter!

Spaghetti Squash: No surprise here. These often last until the next harvest. We even store them on shelves in the (much warmer) pantry and kitchen, and they don’t seem to care. We have more than a dozen left, and are really just starting to use them now, as we run low on the other types of squash. I do notice that the spaghetti squash that were stored in the cool room are denser and heavier than the ones stored in warmer locations, which is an interesting thing that I will try to keep paying attention to.

Potatoes: Our potatoes are still firm, and not yet sprouting. They are starting to get slightly bitter, though. I don’t know if it’s light exposure (from the little window in our root cellar) or just age, but it does seem to happen to us every year in the spring.

Onions: Again, the only surprise with the onions was that we have basically run out. Onions store well for us, just loose in a basket in the cool room.

Our carrots are done, now, and I think we can call the apples done, though we’ll keep a few kicking around just to see what happens with them. Pretty soon, we will have spring eggs and early chives to add to our local food diet, and not too long after that, we’ll be enjoying asparagus and rhubarb. I’m excited about that, as we’ve tried to eat mostly seasonal vegetables through the winter, and I’m just a bit tired of root veggies, cabbage, and squash. The snow is just starting to melt off the garden, and in a couple of weeks, we’ll be able to dig up the parsnips and carrots we left in the ground last fall. We didn’t leave a lot for eating – we’re going to try to save seeds from these – but I might just try one or two to see how they taste!