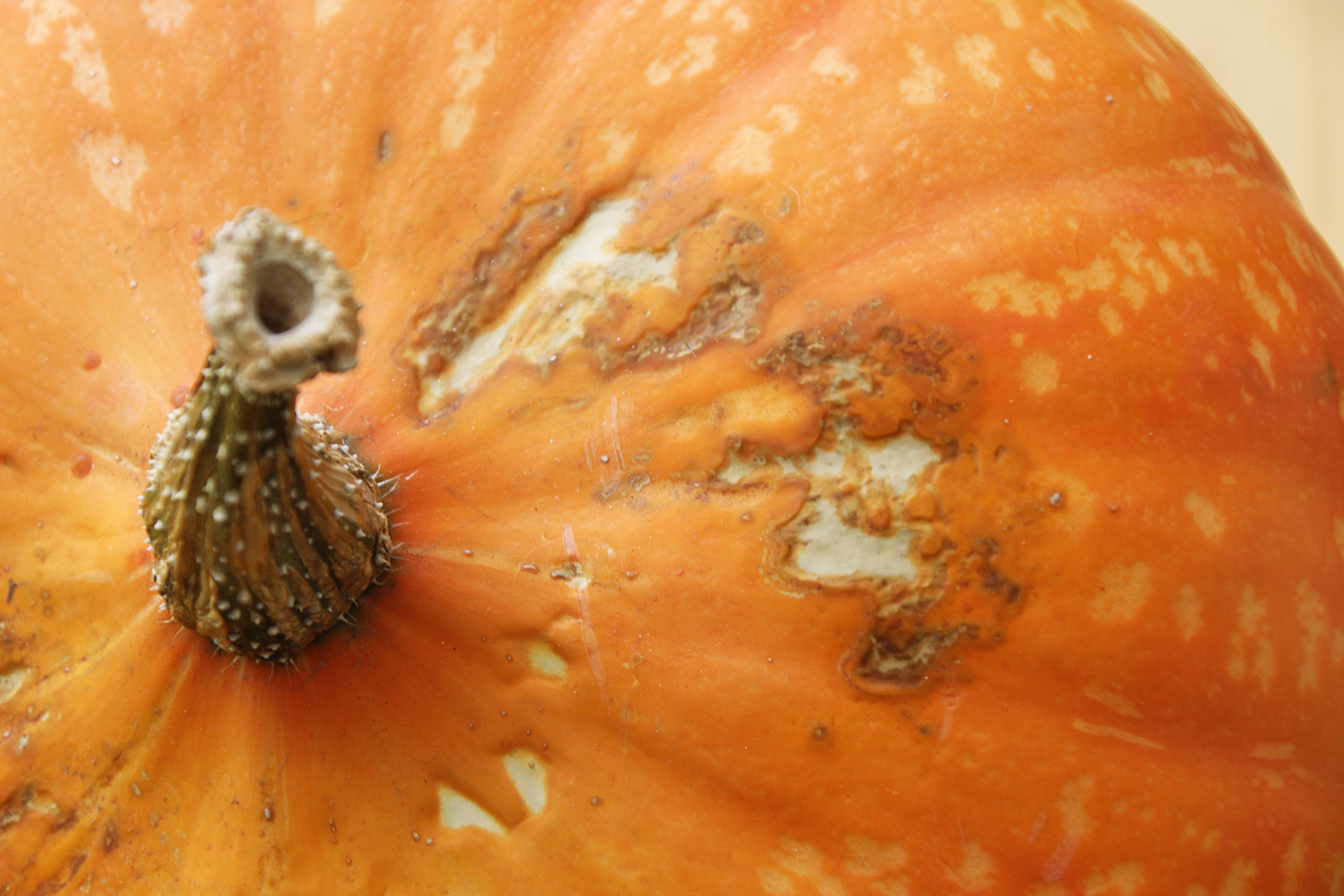 Who cares about rotting squashes, anyway?

Well, it’s actually kind of a big deal around here.

You see, we normally harvest at least 90 squashes and pumpkins of various types each fall, and most of those get stored to be used through the winter. Over the years, we’ve discovered approximately how long each variety of squash we grow will last in our storage conditions, and we use them up in that order. Pie pumpkins first, since they usually don’t last much past Christmas for us. Then the long-keeping c. maxima squashes like Red Kuri and Sweet Meat, which generally make it until March or April. Lastly, we dig into the Spaghetti squash, which seems to last virtually forever, or at least until our next harvest. I’m not sure if we’ve ever had a Spaghetti squash go bad on us, though one time we cut into one to find all of the seeds had sprouted!

Our little landrace breeding experiment, where we save cross-pollenated seeds and replant them, has added a new twist to our squash eating schedule. I assumed that since all of the parent squash were long keepers, that my F1 (first-generation) hybrids would store well. I was wrong. About half got rotten or soft spots before we even finished curing them.

It messes us up when things go bad out of order, or get gooey on the spare room floor. Not only is there the mess to clean up, but we also hate to waste the food. It’s kind of been a year for that, though. First, half the maxima hybrids unexpectedly went kapoot. Then, the pie pumpkins went and lasted until April. Now, some of my c. maximas are stealth rotting.

Of course, at the exact same time, some of our squashes have developed weird spots or discolorations that did not affect the meat at all, which has made it more difficult to identify which squashes are actually starting to go off. We had an exceptionally dry growing season, and grew some of our squash in a different spot than we have in the past, which may have caused some of the spots.

Usually, a squash that’s about to go bad develops little indented soft spots. This isn’t exactly rot, but it’s where the rot will happen. A lot of the time, on our squash, at least, it tends to start around the stem, or on the ‘shoulders’ of the squash. If we notice it in time, we use the squash right away, or roast it and freeze the puree for baking later. The little spots are hard to notice, though, especially if you’re not going looking for them. We know to look for them, and try to check the squash over at least once a week, but they don’t last long, and are easy to miss if you’re in a hurry.

Next, there is the mold. Usually, our squash develops a black or dark colored mold, often in several places at once. We have been known to cut out the moldy spots and feed the firm flesh to the chickens; we don’t usually eat it if it gets to this point, though you probably could if you were careful to cut a wide margin around the moldy spots. Often, by the time there is visible mold on the outside of the squash, the whole seed cavity is moldy, too, which is a shame, since the chickens seem to enjoy the seeds.

If we don’t catch it at the black and spotty stage, the squashes tend to collapse into a gooey, smelly, disgusting mess that is no fun at all to clean up.

This year, we’ve had a couple of squashes go from looking completely sound to being a crumpled, oozing mess with no warning, whatsoever. They don’t smell, and there is little or no mold; it is almost like they froze and the insides liquefied, though I know for a fact that none of these squashes got more than a light frost at any point. Combined with this pumpkins-till-April thing, I’m kind of scratching my head. Maybe we’ve got a new type of mold in our garden, or maybe our growing or storage conditions were subtly different in a way that favors a different kind of rot than we’ve seen in previous years.

Regardless, we’ve moved all of the still-sound squashes off the floor and onto something a little easier to clean up. We’re in the big push to use up the last of the c. maxima squash before they go bad, anyway, since they don’t normally last past April for us. We only have nine maximas left, which isn’t many; we’ll often use two of the little ones in a single recipe. We’ll roast them and freeze the puree, and try to sneak in a couple more of our favorite maxima dishes before they’re done for the season.