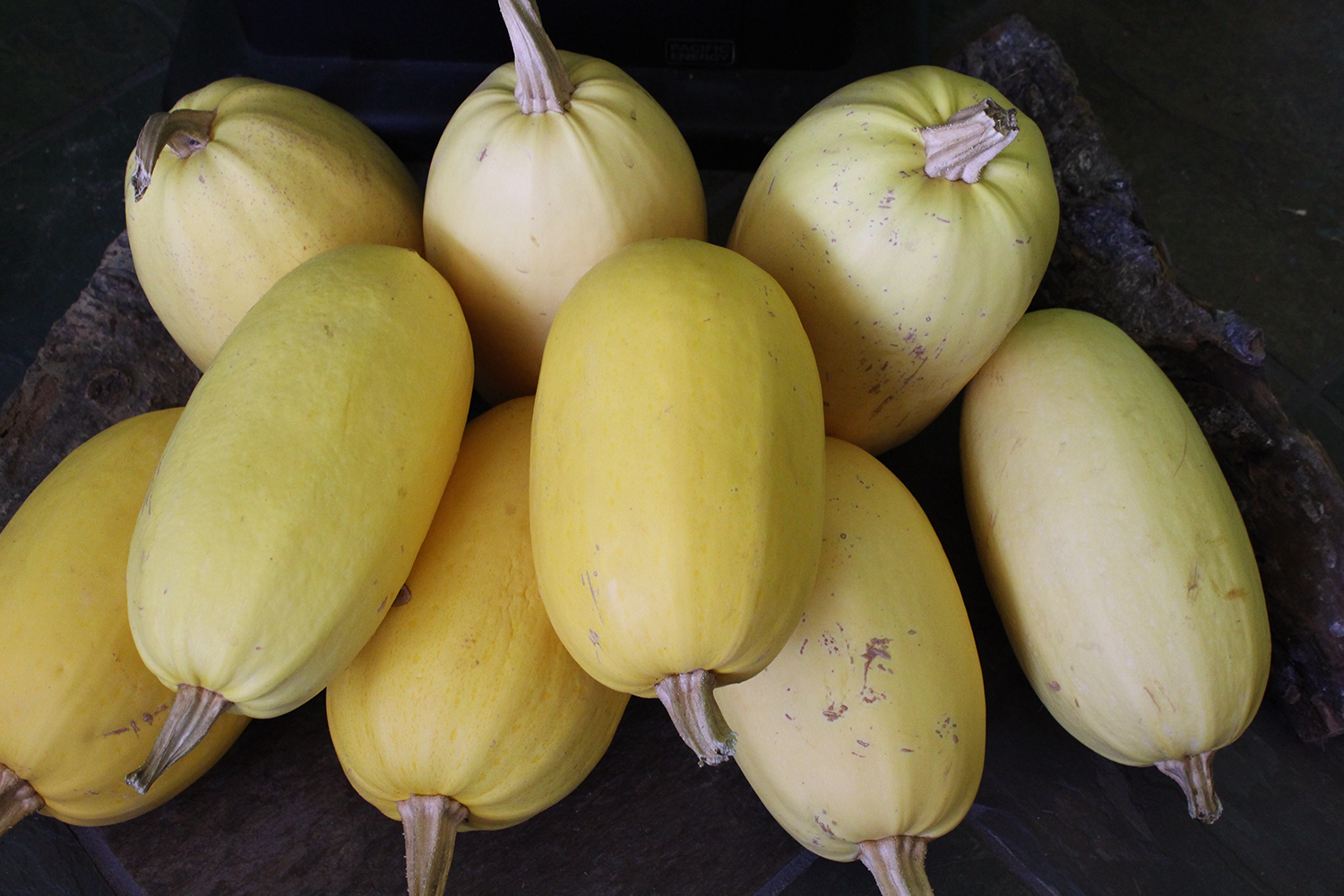 We’re creeping up on one of my favorite parts of the year – planting! We have a couple zillion fruit trees, grape vines, and perennial flowers either on their way or waiting in my seed starting trays, and I can’t wait to get them into the ground.

Meanwhile, on the food storage front, our root cellar veggies are mostly done. We still have potatoes that are firm and not sprouting, but they are bitter, and not tasty. There are a couple of little onions, which will likely still be good for another month, but we have essentially run out, and resorted to buying onions from the store. We also have a couple of maxima squash left (!), which I’m torn between roasting up before they rot and leaving alone to see how long they’ll hold out…either way, we’ll definitely be saving seeds from those ones!

Then there’s the spaghetti squash. That stuff is food storage magic. Still firm and tasty, after sitting on our kitchen counter since we harvested it in September. Now that the other squash is basically done, we’re instituting a roster of spaghetti squash meals – enchalada stuffed squash, spaghetti squash with feta and cream cheese, and squash with meat sauce are going to be in heavy rotation until it’s too hot to use the oven. Yum.

I’m expanding the food storage report to also talk about fresh foods that are in season month by month. For us right now, that’s a very limited selection…basically, just eggs, chives, and the early asparagus, for now.

The dandelions aren’t even up yet (we’re zone 2, maybe 3, and it’s still well below freezing at night), but we have a patch of chives and asparagus plants that are planted right up against the foundation of the house. Because the heat from the basement bleeds out into the soil, things planted there come up weeks earlier than anywhere else…meaning we’ve got lovely chive patches just in time for the beginning of the spring egg glut.

Did you know that eggs are naturally a seasonal food? In the dark of winter, most hens will hardly lay anything at all, unless you have heat and artificial light in your coop. In December and January, we’re lucky to get a few eggs a day from our 25 (or so) hens – or none at all, if the hens are molting. Once the daylight hours go over 12 or 13 hours a day, though, the chickens kick it into high gear. Even though most of the hens in our flock are at least 2-3 years old, we’re still getting more eggs than we can really eat – we’re getting around a dozen eggs a day right now, and this will increase as it warms up and the days get really long.

The asparagus in the patch by the house was actually up about 5 or 6 inches, and I was eagerly eyeing them up, but it didn’t occur to me to harvest them before we had a couple of nights with -10 Celsius temperatures, so what was up is now a limp, rotting mess. There’s more coming up already, though, so it’ll only be a few days before I have my first taste of asparagus, likely served as a side to scrambled eggs with chives. I can hardly wait! 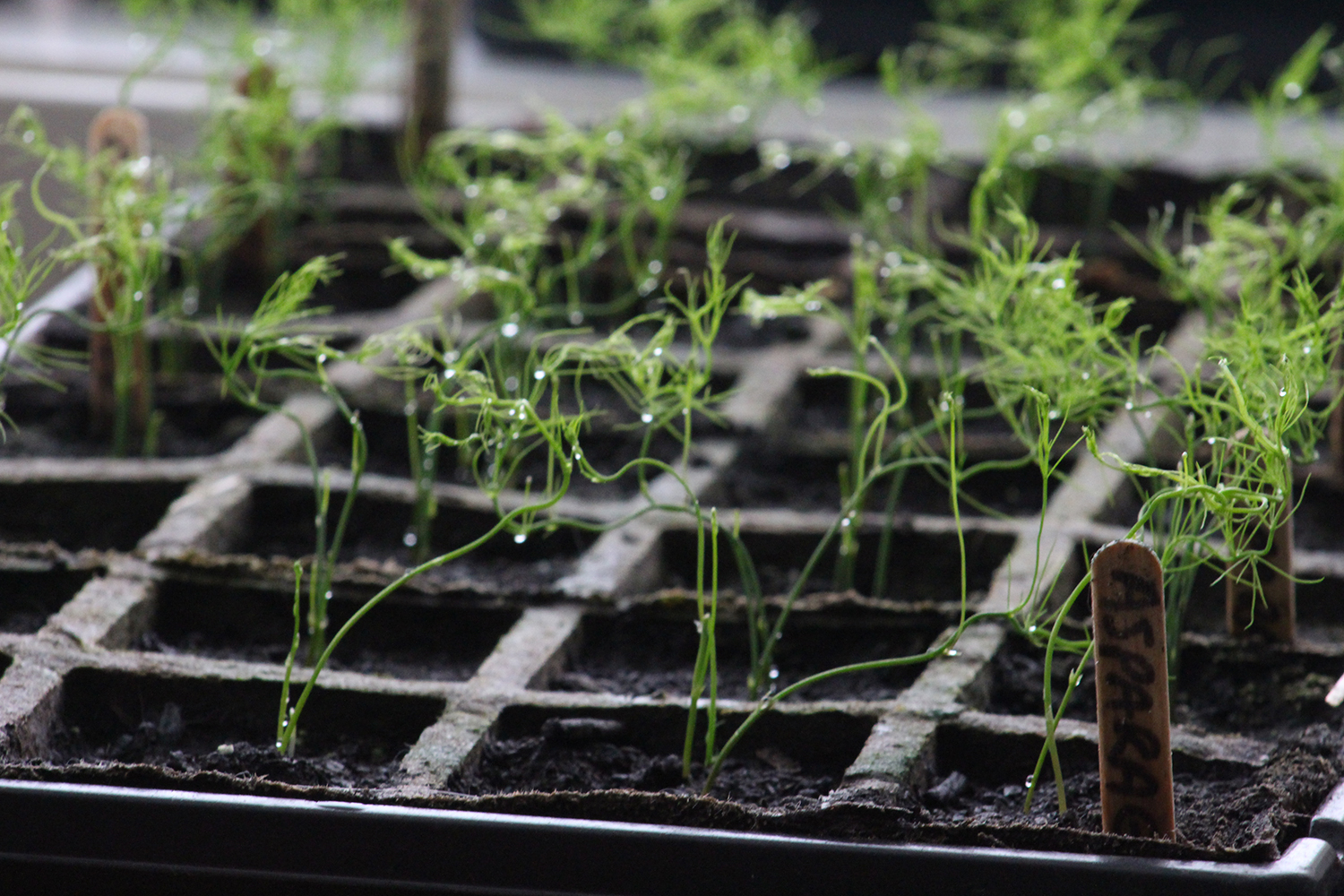 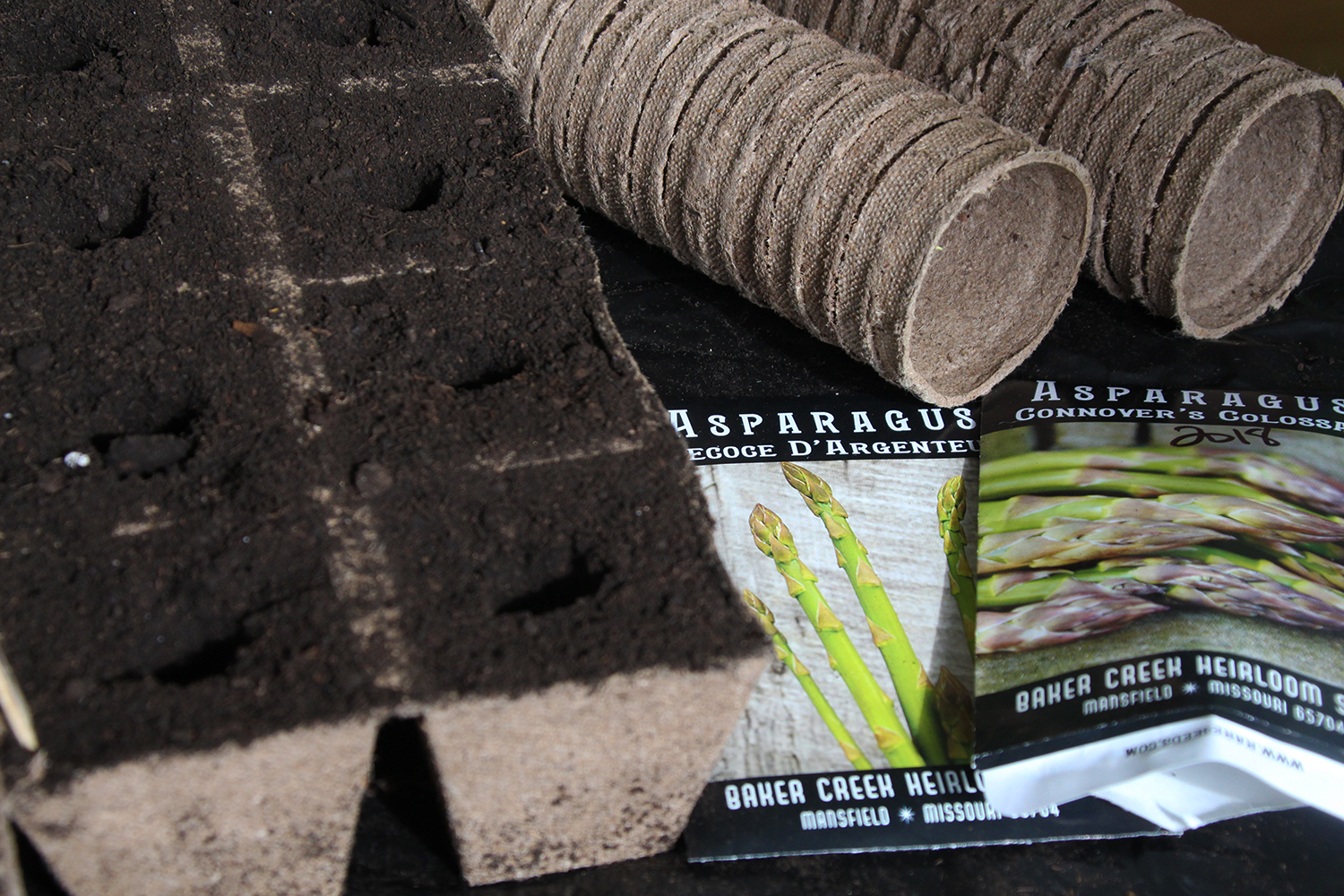 I get a little frustrated with my access to garden plants, sometimes. There are no fruit tree nurseries in the nearest town, and only a couple of big-box stores that carry garden stuff; the locally-owned place shut down last fall. There are a couple of bedding plant places, but they don’t generally have much (or anything) for perennial plants.

Big box stores are frustrating places to try to buy perennials. Far too often, I see zone 4 or even 5 stuff being sold; a lot of tree and shrub buyers are going to be disappointed the first time their purchases encounter a normal winter.

I am also sick of winter. Seriously sick of winter. The local news pointed out that we had 67 consecutive days that did not come above freezing; more than half of them were -30 or colder. The days are getting longer, but the snow is still at least thigh deep across most of our acreage, and while it is around freezing, it’s not really warm. This is probably a taste of our new normal with climate change. The hype had us all set for growing mangoes on the prairies in my lifetime, but instead it’s looking more like drought and polar vortexes and forest fire smoke. Blech.

Clearly, I needed something to get into a better headspace. What better than playing in some dirt?

I ordered a couple of asparagus seed packets over the winter, since there are only three (!) varieties of asparagus that I have come across to order as roots online in Canada. What the heck, Canada? I’m all about the diversity, and have been pretty disappointed about the Mary Washington / Jersey Giant / Sweet Purple asparagus options.

Luckily, Baker Creek had a couple of new options I hadn’t seen before – Connovers Colossal and Precoce D’Argenteuil. Ordering those effectively doubles my asparagus options. I have never tried growing asparagus from seed, though, so it may or may not work out as planned. Some of our asparagus has self-seeded before, as we’ve found tiny little fronds in the garden, but we haven’t tried to do it on purpose, up until now. Stay tuned for updates in a few months.

The seed packets indicated to start the seeds 8-12 weeks prior to last frost, and here we are, 11 (or so) weeks from our anticipated planting date. Perfect timing.

So I got out all of my seed starting supplies (hello, old friends!) and played in the dirt for a bit. Besides the asparagus, I planted a bunch of seeds for perennial flowers that will attract bees and butterflies. Black Eyed Susans, Purple Coneflowers, and some Speedwell – pretty things for the flowerbeds I plan to dig in the front lawn this spring.

Now we just need this snow to go…