Saving squash seed is kind of an all-year affair.

The actual saving of seeds, for us, is mostly happening in February and March, as we want to select for squash that is long-keeping, which means not saving the seeds from squashes that go soft early in the year. We do save seeds from named varieties that are known long-keepers, even if we eat them in, say, November; however, we weight our seed saving efforts towards the survivors that are still hanging in there by this time of year.

If you want your saved seeds to produce squash that resemble the parent plants, it is important to choose varieties that will come true from seed. Hybrids, which are crosses between different squashes from the same species, do not come true from seed – your seeds might grow something similar to one or the other parent, but won’t necessarily be the same as the squash you saved your seeds from. Hybrids often have more disease resistance, or bear heavier crops, so lots of gardeners like them; they just don’t make the best choice for saving seeds from.

Heirloom varieties typically come true from seed. That means that if you grow a particular type of pumpkin, for instance, and save the seeds, your seeds will grow pumpkins that are the same as the original plant…as long as those pumpkins were not cross-pollenated by a different variety of the same species.

You can learn more about the difference between heirloom and hybrid seeds here.

In order to keep varieties pure, you need to pay attention to what sorts of squash you are planting in your garden. There are four species of garden squash: curcurbita pepo, curcurbita moschata, curcurbita mixta, and curcurbita maxima. They do not cross with each other, so you could theoretically grow four different squash varieties (one of each type) and get pure seeds from each of them. In practice, it is more complicated, at least for us, as three of our favorite squashes (pie pumpkins, spaghetti squash, and zucchini) are from the same species (c. pepo), meaning they will inter-breed.

There are ways to keep your seed strains pure, even if you are growing several squashes from the same species. This involves taping the female flowers shut, so they cannot open, then carefully peeling them open and pollenating them with a male flower of your choice, before taping the female flower shut again, allowing the fruit to develop without any new pollen being added to the mix. We have not tried this yet – gardening with children makes it very difficult to deal with careful timing and delicate close work. You can find good descriptions of hand-pollenating squash here and here.

The other way to keep your seed pure, is to plant only one type of squash from each species. We have done this before, with great success. We always plant several types of c. pepo, as we just can’t imagine trying to get through a year with no pie pumpkins, or no spaghetti squash, or no zucchini. However, we have some favorite types of long-keeping curcurbita maxima squash that we have planted one at a time. Our current favorite heirloom c. maxima squashes are Red Kuri and Sweet Meat.

We haven’t had any luck growing butternut-type squash like c. moschata here, as our season is so short; however, we’ve joined up with a breeding project that will hopefully (eventually) produce a c. moschata that will mature fruit in our cool 90-day season. We’ve never tried a c. mixta squash, though it is bound to happen eventually!

We tend to alternate years for seed saving efforts; some years, we grow only one type of c. maxima squash, and we can then save pure seed from that. Other years, we grow a bunch of different squash types. We still save the seeds from the crossbreeds, and grow them out; the results usually taste quite good, and over time, by saving seeds from the tastiest and longest-keeping squashes, we will develop a strain of squash that tastes good to us, keeps a long time, and grows well in our particular environment.

The actual seed collection and saving is pretty straightforward for squash. When you are ready to cook the squash, cut it open and scoop out the seeds. The seeds are attached to stringy flesh; rub this between your hands to get as much flesh as possible off of the seeds. Then, put the seeds in a dish or cup of water, and let them soak / ferment for a few days.

Once the remaining flesh falls off the seeds with rinsing (or they begin to smell – usually a few days, depending on the temperature), pour them out and rinse them thoroughly, rubbing them through your fingers to clean them off as much as possible. Then dry the seeds on a parchment-lined cookie sheet, stirring them from time to time. When the seeds snap when you bend them (instead of bending), they are dry enough to store.

At that point, I pick out the plumpest, most nicely-shaped seeds to save, and feed the rest to the chickens, as we always end up with way more seeds than we could ever use!

Squash seeds stay viable for quite a long time – five years or more if they are kept cool and dry, so you can save seeds one year, then use them for several years. I usually store my saved seeds in plastic baggies in a box in the bottom of a cool closet in our spare room. 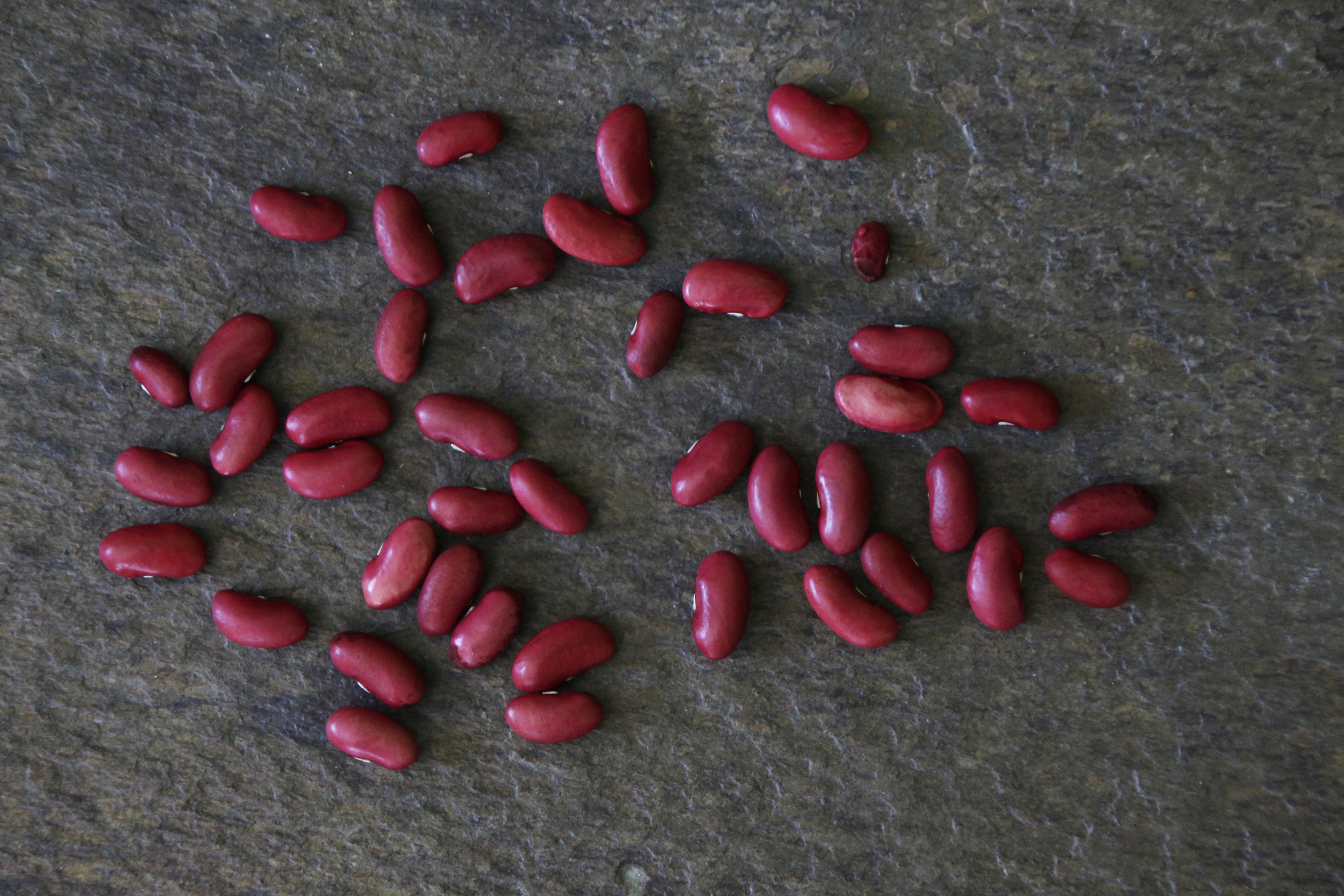 Spring is almost here, and for those of us in the North, it’s time to be thinking about ordering seeds and starting plants.

But which seeds to order? How do you make sure you aren’t putting genetically modified (GMO) vegetables in your garden?

A lot of people have concerns about GMO foods, and want to make sure that they are not growing GMO’s in their garden or feeding them to their kids. However, there is a lot of hysteria and misinformation floating around out there, making it hard to figure out where to shop or what is safe to buy. Here is an explanation of the differences between Heirloom, Hybrid, and Genetically Modified (GMO) seed.

First, it is important to remember that Genetically Modified Organism (or GMO) seeds are not really available to the general public. The majority of GMO seeds out there are grains, such as canola and corn, or other commercial plants, like cotton and alfalfa.

GMO’s are created in a laboratory, often using genes from completely different species that would never be able to breed in nature. They are usually created to be disease resistant, or, more commonly, resistant to specific herbicides, such as Roundup Ready canola, which will survive being sprayed with glysophate, allowing farmers to use Roundup to control weeds in their canola fields.

Farmers have to sign an agreement not to save their seeds, since the GMO producing seed companies hold patents to the seeds, and require royalties from anyone planting those seeds. While The Non-GMO Project lists corn, papaya, summer squash, and potatoes as having widely available GMO options, it is unlikely you would come across GMO garden seeds for a backyard garden or orchard. If you are curious about what plants have GMO varieties, the ISAAA’s GM Approval Database has a searchable list that is quite interesting.

The biggest threat to the home gardener would be if your crop was cross-pollenated by a GMO crop. Given that most home gardeners are not growing canola, soybeans, or cotton, it is not an issue for most people. However, if you live in a rural location, and are growing summer squash next to a field of commercial summer squash, it might be worth speaking to the farmer about what variety he or she has planted, or simply don’t save your summer squash seeds that year.

There are other issues with GMO seeds, such as herbicide use and resistance, concerns with untested genetics getting into wild populations through cross-pollenation, and moral issues with large international companies holding patents to the seeds that provide our food. However, you don’t really need to worry about finding them in your garden.

Hybrid seeds are sometimes confused with GMO’s, but they are completely different. Hybrids not created in a lab using biotechnology; rather, they are created by crossing two different plant cultivars (types) of the same species – so, for instance, a hybrid squash seed is created when one type of squash plant is intentionally pollenated using another type of squash plant. These crosses could occur naturally in people’s gardens, but seed companies create the crosses under carefully controlled conditions, so that the person who plants and grows the seeds gets a consistent and predictable end product.

Hybrid seeds often have better disease resistance or better yield; some hybrids are bred for better flavor, as well. Hybrids are widely available in seed catalogs, and many gardeners grow them. Seed companies usually mark which seeds are hybrids.

The one significant drawback to hybrids is that they do not come true from seed. This means that if you save seeds from a hybrid plant, then plant them the following year, the plants you get will most likely resemble one of the original hybrid’s parents, rather than resembling the hybrid plant you saved your seed from.

Hybrids are nothing to be afraid of, and are often a good choice for a gardener looking for specific traits such as high yield or drought tolerance. Unfortunately, because of the confusion over GMO’s, hybrids sometimes get a bad rap, which they really don’t deserve.

Heirloom seeds are seeds from stable cultivars. This means that the flower or vegetable sub-type was created through traditional breeding, by crossing various plants of the same species, then selecting specific plants that have the traits the gardener was looking for, and saving seeds from those for several generations, until the offspring plants have the same traits as the parent plants. Heirloom varieties are perfect for saving seeds from, since the parent plants are the same as each other, so plants you grow from saved seeds will have predictable traits.

Which Is Best For Me?

Ultimately, the choice between hybrid and heirloom seeds comes down to your own goals. Do you want a plant that will give you the most possible produce in the smallest space? A hybrid might be perfect for you. Do you want to save seeds from your garden and get away from having to buy new seed every year? An heirloom variety is probably your best bet. You are unlikely to end up with GMO seeds in your garden, so even if you are trying to avoid GMO foods, luckily, you won’t have to work very hard or worry about where you are getting your seeds from.

“Agriculture and seeds provide the basis upon which our lives depend. We must protect this foundation as a safe and genetically stable source for future generations. For the benefit of all farmers, gardeners and consumers who want an alternative, we pledge that we do not knowingly buy or sell genetically engineered seeds or plants. The mechanical transfer of genetic material outside of natural reproductive methods and between genera, families or kingdoms poses great biological risks, as well as economic, political and cultural threats. We feel that genetically engineered varieties have been insufficiently tested prior to public release. More research and testing is necessary to further assess the potential risks of genetically engineered seeds. Further, we wish to support agricultural progress that leads to healthier soils, genetically diverse agricultural ecosystems and ultimately healthy people and communities.”

You can find a list of seed companies that have signed the Safe Seed Pledge here.

Remember, though, that just because a company sells hybrid seeds, or may not have signed the Safe Seed Pledge, doesn’t automatically mean they are selling you GMO seeds or supporting companies who do. Contact them and see what they say!