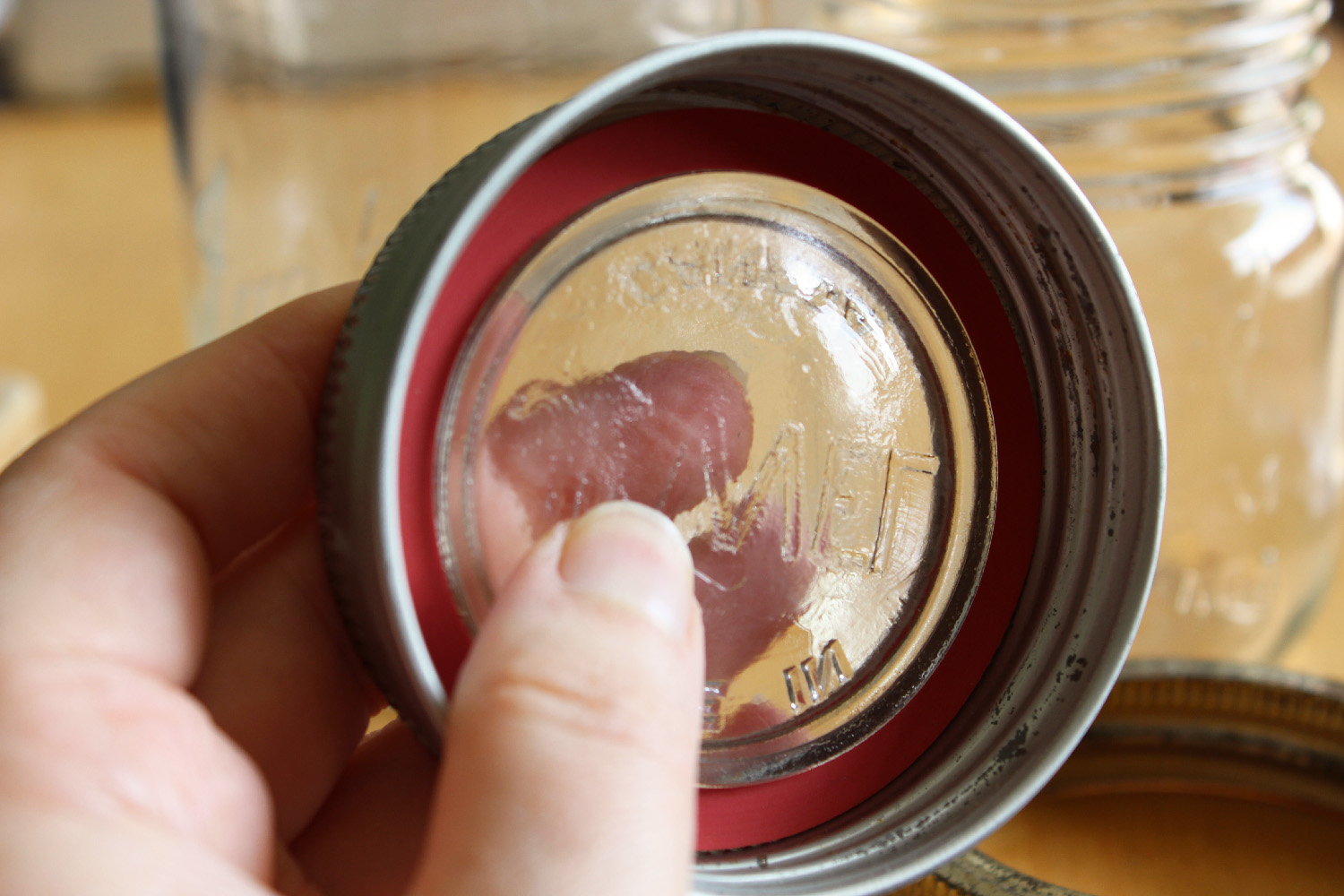 This weekend, I started experimenting with canning with glass lids on my Gem jars.

In Canada, especially Western Canada, we have a unique size of canning jar, with a 78mm mouth. They were produced up until the late 1990’s or early 2000’s, and were sold under a variety of brand names, including Gem, Jewel, and Crown. Originally, these jars used a glass lid, with a rubber gasket underneath to allow a seal to form; however, when the metal lids became available, most home canners switched over to those. This blog has an interesting article on the history of 78mm mouth jars and lids in Canada.

I have a sizeable collection of Gem and Jewel jars. Some were inherited from family members, and others I acquired from yard sales. Even though the jars were discontinued before I ever started canning, I preferred them, because the 78mm mouth is a nice size for peach and pear halves, and the jars themselves have a bit of a shoulder that helps to keep canned fruit under the liquid. Plus, I could get them for a couple dollars a dozen at the yard sales, and I’m cheap. Up until this spring, you could still get new lids and bands for the 78mm mouth size in a variety of local stores, so I was happy to keep using them.

Unfortunately, Bernardin, the last lid manufacturer in Canada, discontinued the lids in the spring of 2022. They tried to discontinue these lids once before, in the early 2000’s, but there was such an outcry that they relented, and continued making them for another 20 years! However, it doesn’t look like they are going to change their minds this time. I got more than a little panicky about this, and asked my friends across the country to scour stores for the last remaining lids. I have a few years’ worth of lids, now, and plenty of bands, so I’m good for a little while, but with the price of canning jars right now, I was dreading the cost of trying to replace my dozens (hundreds?) of Gem jars with modern wide-mouth jars between now and when my lid stash runs out.

I was cleaning in my basement late this summer, and came across a box that had been shoved in a dark corner since we moved here. In the box…surprise! A huge collection of the old glass Gem lids, with a big stack of the old deep zinc bands that were made to accommodate them! My mother-in-law had saved her glass lids when she switched over to metal ones, and must have given me her collection just before we moved.

This prompted me to do a little googling, to see if I could still get the rubber gaskets for these lids, and wouldn’t you know it, but Canadian Tire still carries them! I have also seen them at our local Co-op Grocery store and at Peavey Mart. They are sold under the brand name Viceroy, and are not at all expensive, so I’m planning on buying a bunch. From my internet research and from speaking with my mother-in-law, the gaskets can be re-used for years, until they get stretched or until they start cracking, which is also handy. Financially, using a $2 box of gaskets for several years is way better than replacing a $6 box of metal lids annually, so that’s another bonus to the glass lids.

Having gotten my hands on all the necessary parts, I decided to try canning with glass lids this weekend. Anecdotally, a number of my friends have reported that they have more seal failures with their Tattler reusable lids, so I thought I might run into that with the glass ones, too. I was doing a second batch of pickled plums yesterday, mostly because I needed to use up the plums, so a few seal failures wouldn’t be a disaster. Worst-case scenario, we could throw the jars in the fridge and turn the kids loose on them. Plus, with pickles, if I have a seal failure later, I’m less likely to end up with a fizzy, fuzzy mess in the pantry.

I found a couple of resources for using the glass lids – this youtube video shows you the process, and this blogger also goes through it, step-by-step, an a three-part series. Interestingly, the blog post noted that the modern bands can be used with the glass lids, which I did not know. I was a little dubious, since there is a substantial difference in the depths of the two styles of ring, but what the heck – I decided to experiment with that, too.

What I did was scrub the glass lids very thoroughly with a toothbrush to get off any dust or goo, then put a rubber ring on each lid. I found that the rubber rings seem to have a ‘right way’; if one was fighting and not staying on well, flipping it over seemed to solve the problem. Then I put the lids, with the gaskets, into a pot, which I simmered on the stove while I made the brine for the pickles. It seems that the recommendation is to boil them for at least ten minutes; mine probably simmered for closer to half an hour, and that did not seem to cause any issues. I used kitchen tongs to grab the lid/gasket sets out of the boiling water and put them on the jars, which worked great.

I filled my jars a bit less than I otherwise might; with raw pack fruit, I usually do that anyhow. When I put on the rings, I didn’t crank them down tight; I put them on snugly, then backed them off just a tiny bit. I got that from the recommendations for how to use Tattler reusable lids, and it seemed like a good idea. For my canner load of 7 pints, I used the old deep bands for 4 of my jars, and the modern shallow bands for the other 3. When the processing time was done, I turned off the burner and let the jars rest for 5 minutes in the canner. I haven’t seen this recommended anywhere, but I find it reduces siphoning, and it doesn’t seem to affect how the jars seal. Then, I took the jars out and tightened the bands down as much as I could. The shallow rings actually felt easier to tighten than the deep rings, which is interesting.

I was so excited to check my jars that it was hard to leave them on the counter and go to bed without fiddling with them. This morning, though, I went and took off those bands first thing, before I even had coffee! I took off each band, poked each lid a bit to see if it would move, then picked up each jar by the lid. I didn’t lift them far off the counter, less than an inch, but enough that the lid was taking the full weight of the jar. If it didn’t seal, or formed a weak seal, the lid would pop off, so don’t lift too far, or you could have a mess on your hands! My mother-in-law mentioned that her mom would also flip the jars over and watch for bubbles sucking into the jar, which would also suggest a seal failure, so I tried that, too, but I kept a couple of fingers over the lid so that the contents wouldn’t pour out if the seal was bad.

Seven jars is too small a sample size to tell if I will have the same failure rate with glass lids that I do with metal ones, which is usually about 1 jar failing to seal out of every 2-3 canner loads. I’d even be okay with a seal failure in every 1-2 canner loads, as I usually want to sample things anyhow, and we have plenty of fridge space. I also don’t know if the seals will hold as well or as long as they do with the metal lids, so I guess I will have to report back in a year or so, but for now, I’m happy to have a way to keep using my Gem jars.